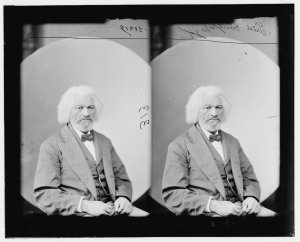 Brooks starts out by thinking about the role played by musicians at the DNC, but then settles into a thoughtful piece on Frederick Douglass and photography.

He mentions a book called “Picturing Frederick Douglass” and tells us that Douglass was perhaps the most photographed person during the 19th Century – there are more portraits of Douglass than of Abraham Lincoln.

But he also points out that Douglass thought, wrote and spoke about images quite often. He felt that photography could be used to re-set images of African American people, and that this might lead to new perceptions of race as the country moved towards, and out of, abolishing slavery.   He mentioned that Douglass wrote four essays on photography, but Brooks didn’t tell us where to find them.  I set out on a search for these essays – getting expert help from the Seattle Public Library’s help center, a terrific librarian at the Douglass/Truth branch (as she mentioned, I guess this is a great place to look) and also a librarian at Evergreen State College.

It turns out that the essays are in that book:

Picturing Frederick Douglass : an illustrated biography of the nineteenth century’s most photographed American

The Evergreen librarian also found that the Library of Congress also has an online copy of one these handwritten essays at:

and that there is a lovely essay by Donna Wells which starts out by saying:

“While the inventor of the daguerreotype was a Frenchman, nowhere did this passion catch

on as it did in the still young United States. For Douglass, the former slave and abolitionist

orator, photography, as a mirror of reality, would serve as a new weapon in the fight

for freedom and human dignity.”