Home » Tell Me How Long Trane’s Been Gone

“TELL ME HOW LONG TRANE’S BEEN GONE”

Written and co-produced by Larry Abrams. 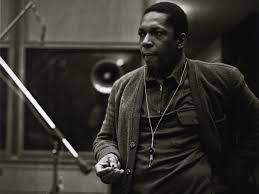 A five hour audio documentary on the life, music and legacy of

The hour begins with an introduction to John Coltrane,

his life and work and moves us from his childhood in

North Carolina through his family’s migration north to

scene that Trane discovered in Philly and soon are

Chapter One is “You Can’t Go Home Again”,

Gary Bartz as well as archival interviews with

HOUR #2—IN THE PYRAMIDS

Sandoli, record producer Bob Theile and many others.

The hour tells the story of Trane’s career from the

time he began playing with Miles until the creation of

his great quartet with McCoy Tyner, Elvin Jones and

Jimi Garrison. It begins with

as archival interviews with Jimi Garrison and John

Music demos in the hour are by Zita Carno, Jimmy

Hentoff and many others.

The hour follows the story of John Coltrane’s Great

Quartet against the backdrop of the Civil Rights

Movement and the controversy that surrounded the

development of Coltrane’s music. The Chapters are;

THE SECTION ON ALABAMA INCLUDES A JUXTAPOSITION OF COLTRANE’S COMPOSITION AND MARTIN LUTHER KING’S EULOGY FOR THE 4 GIRLS MURDERED IN A BIRMINGHAM CHURCH – THIS COLLAGE, CREATED BY STEVE ROWLAND POINTS TO THE STRONG INFLUENCE THAT KING AND THAT AWFUL EVENT HAD ON COLTRANE.

THE SECTION ON A LOVE SUPREME INCLUDES ANOTHER REMARKABLE SECTION.  GOSPEL SINGER RUSSE JORDAN IS HEARD SINGING THE WORDS TO THE POEM PRINTED ON THE ALBUM’S COVER, NOTE-FOR-NOTE IN SYNC WITH COLTRANE’S POWERFUL SOLO.

HOUR #4—SEARCHING FOR THE ONE

The hour follows the music and career of John Coltrane

against the backdrop of the Black Nationalism and

black cultural nationalism that was beginning to

become a major force in Black America and documents

Trane’s involvement in the Jazz Avant-Garde of the mid

and late 60’s and its impact on his music. The

Chapters of the hour are;

ChapterFive—“John Gilmore, You Got the Concept”,

HOUR #5—HOW LONG HAS TRANE BEEN GONE

Coltrane, guitarist Sangeeta Berardi, and many, many

The hour follows the last years of John Coltrane’s

life, his enormous influence in the years after his

passing and his place in the music of our time. The

Chapters of the hour are:

Chapter Two—”The Revolution Will Not Be Televised”

Chapter Three—”There’s a Hole in the Bucket”